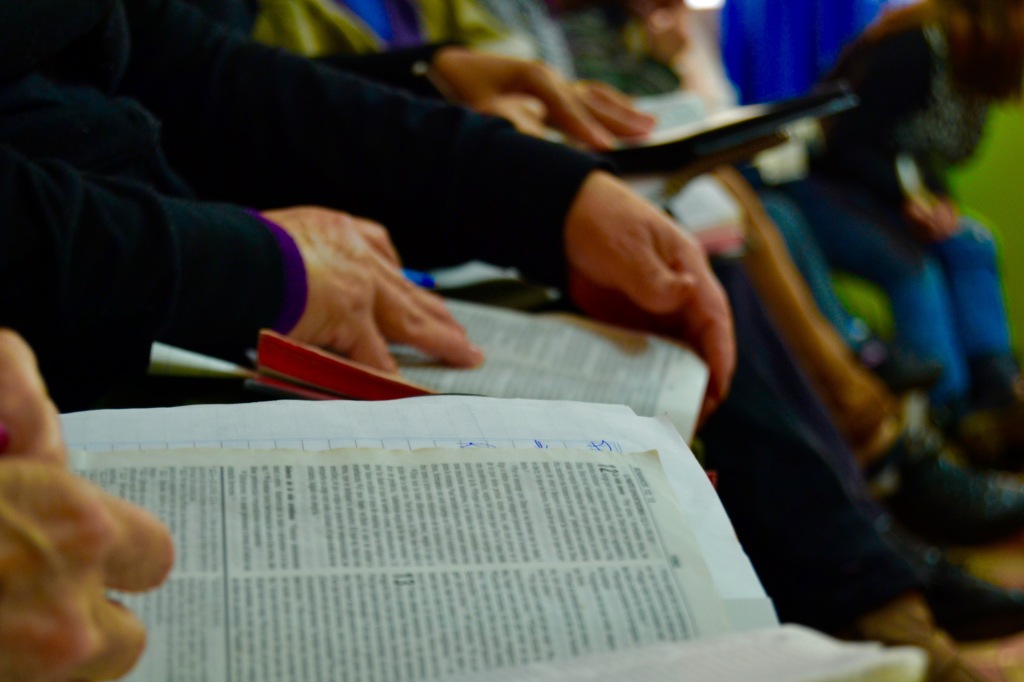 “The word creates and nourishes the community while the community proclaims and embodies the word.… Bible interpretation is not just about me and my Bible. It is about God’s word to his people…” –– Total Church

During my early growing up years, backyard football was a staple among the kids in our neighborhood. And yes, we played tackle. “None of that wimpy two-hand-touch stuff” we would proudly declare. The game of football, you might say, was foundational in forming our little band of ragamuffins. We would have scarcely spent so much time together had it not been for the existence of that game. Yet, not only did football help establish our community, the enjoyment of the sport itself was dependent on the very community it formed.

Spiraling the pigskin high into the air and running to catch it myself, pretending to be both quarterback and receiver, was mildly entertaining for a few minutes, but it paled in comparison to the pleasure of a real game with my neighborhood buddies. Football helped create a community for us and in reality, it could only be played and enjoyed in that community context or in one like it.

The Cultural Cards Are Stacked Against Us

Our society holds independence and individualism among its chief values, and if we’re honest, many of us also have a deep suspicion of authority. This is the world we live in, and like fish swimming in water totally unaware that they are wet, we have become so accustomed to these values of Western culture that we often don’t even realize their impact on our thinking. The values of the Kingdom of God are indeed upside down in comparison. In the Kingdom, the King graciously calls us to submit our lives to the authority of his word and to live in mutual dependence on our fellow Kingdom citizens.

The Truth Sets Us Free to Thrive in Relationships

God’s commands are lifegiving. Rather than taking away our freedom they bring us into true freedom and establish a shared life of love. It was the rejection of God’s authoritative word in Eden that led to the breakdown of true community to begin with. So as God works in human history to restore community he does so through his word. We see this on Mount Sinai. After Israel is brought out of Egypt, they are given the law to establish them as a new community under the reign and rule of Yahweh (and most of the laws they are given can only be obeyed in the context of community).

Looking back at Nehemiah 8

We see this truth illustrated in the story found in Nehemiah 8:1-12 when the Jews assemble together to hear Ezra and the other priests read from the Law and bring it to bear on their lives.

“And all the people gathered as one man into the square before the Water Gate. And they told Ezra the scribe to bring the Book of the Law of Moses that the Lord had commanded Israel. 2 So Ezra the priest brought the Law before the assembly, both men and women and all who could understand what they heard…” Nehemiah 8:1-3 ESV

In a book that focuses on the rebuilding of Jerusalem and the restoration of God’s people, the point is clear: if true community renewal is going to take place, the Scriptures must be brought to the heart of the people’s shared life. As a diligent student of the Law, Ezra would have understood that God’s word was never meant to be known only by an elite group of scribes but to be taught and applied in the broader community (see Nehemiah 8:13).

Trying to apply scripture outside of community would be like an individual trying to play a boardgame for 3+ players by himself, or like a baseball player who makes it to third base but doesn’t have anyone else on his team to bat him home, or like trying to play quarterback and wide receiver at the same time. You get the point. Word and community go together. “The word creates and nourishes the community while the community proclaims and embodies the word.”

In Nehemiah 8, we see two significant ways that the Scriptures work to rebuild community. First, by exposing our sin (verses 7-9) and secondly, by pointing us to the good news of a secure refuge in Jesus (verses 9-12). A community where these two elements are absent is not a community shaped by God’s word or submitted to his authority.

3. As you realize ways in which you as an individual, community, or family have rejected or ignored the authority of the Scriptures, what does repentance look like? In light of your failure, what does it look like to find refuge in Jesus?

iThere are no comments

Begin typing your search above and press return to search. Press Esc to cancel.